Bryce Canyon National Park • With the coronavirus still in full swing, the National Park Service is testing public access at several parks across the nation, including two in southern Utah, with limited offerings and services. Visitor centers, campgrounds, ranger programs and concessions remain largely shuttered at Bryce Canyon and Capitol Reef, but visitors are welcome at some of the sites overlooking redrock wonderlands.

“I felt like they did it right here because if they opened all the services, I think it would have been too much. Too many people would hit it,” Donna Sullivan, of Sedona, Ariz., said Wednesday at Bryce Canyon. “How do you keep the bathrooms clean? How do people socially distance using the campgrounds? These are going to be hard questions. If they open with less capability, I can understand that.”

Sullivan was on a day visit to hike the park’s Rim Trail and Bryce Amphitheater, two of the few hiking destinations currently open at Bryce. She and her husband found plenty of room to social distance Wednesday, but Bryce saw larger crowds Saturday as word got out that the park is open and will not collect entry fees.

Visitors should steel themselves for a “new normal” that will not likely square with their last trip, said acting park service Director David Vela.

You may have facilities that aren’t going to be available, but the [park’s] footprint will be. So it will be a different visitor experience, and it will be a different normal that we’re going to need to own and, frankly, mitigate,” Vela said in an interview Friday. “This gets to the value and importance of making sure that visitors know what to expect when they get to the park, making sure that visitors go to the park’s website [and] social media … as to what is accessible, how to plan your trip, and, most importantly, what are the expectations when you get there. It’s going to be a new dynamic.”

“This experiment, this limited reopening is really a cooperative effort between us and the public. It’s not possible to reap the full benefits of the mitigations we put in place if people aren’t aware of them and helping us to enforce them,” Densmore said at the closed visitor center, with prairie dogs conspicuously scampering in the nearby meadow.

Last week, Densmore, who serves as the park’s visual information specialist, was busy crafting new signs he later placed at trailheads and viewpoints along the Rim Trail, explaining the measures visitors should take to stay safe while exploring the park. Other signs urged guests to drive slowly to avoid hurting wildlife, particularly threatened prairie dogs, that have become used to roads being car-free.

Within a few feet of traffic-slowing signs, the carcass of one unlucky dog was smeared across the asphalt Thursday.

While the park reopened its core attraction, Bryce Amphitheater, Capitol Reef took an opposite approach, keeping its historic center at Fruita and the Scenic Road closed for now. The outlying Waterpocket Fold district to the south and Cathedral Valley district to the north are accessible. 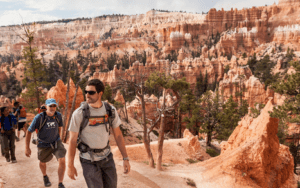 Social Distancing on the trail

“You will see more and more parks provide recreation access. We are doing it very thoughtfully in that we are hearing from state partners about people heading out and going to state and city parks,” said park service spokeswoman Vanessa Lacayo. “We are focusing on helping them plan their visit and visit responsibly, encouraging them to come early in the day and midweek to relieve pressure off staff.”

Parks are continuing to staff up and will be able to boost access as workers are in place to patrol trails and roads, host campgrounds and operate visitor centers and museums. At the Utah parks, seasonal employees who arrive from out of state must quarantine for 14 days before they can report for duty, which will slow the staffing process.

“We are getting different professional opinions that we are leaning on to guide us,” said Capitol Reef Superintendent Sue Fritzke. “Each of us are working with counterparts that may have differing opinions on what should happen.”

Grand County, home to the outdoor recreation magnet Moab, has taken a more cautious approach toward the pandemic and was among the first Utah counties to call for a lockdown back in mid-March. Neighboring San Juan County, which embraced restrictions more slowly, has Utah’s worst COVID-19 infection rate outside of Summit County.

“We are also eager to get Americans back into our national parks. But it is too soon,” warned Phil Francis, a retired superintendent who heads The Coalition to Protect America’s National Parks. “Parks absolutely should not open until the safety of National Park Service employees, concession employees, volunteers and other partners, including those who work and live in gateway communities, can be ensured. Parks must be able to demonstrate that they have adequate staff to protect resources and personal protective equipment available to those staff members.”

The vast majority of park staffers will be in contact with visitors and many live on-site, in close quarters, in government-owned housing, he said. According to a park service document, parks should estimate that up to 40% of the total staff at the park may require isolation and 4% may require hospitalization.

“This is not only impossible under the current setup,” Francis said, “it is unacceptable.”

The coalition has spelled out 10 criteria it believes must be met before parks can swing wide their gates, including giving superintendents broad decision-making authority on opening access to their parks.

These superintendents are now trying to determine the safest way to allow visitors back as directed by the White House.

At Zion, the most popular of Utah’s “Mighty 5” national parks, officials announced they will start reopening “select” areas May 13 but have yet to provide details. Some trails in Zion Canyon present acute social distancing challenges because they are cut through narrow canyons and other confined spaces or into the sides of sandstone precipices, where it is impractical to give fellow hikers a wide berth while passing.

“As we move forward, the health and safety of our visitors, employees, volunteers and partners will guide our operational approach to examine each facility function and service and ensure those operations comply with current public health guidance,” Zion officials posted on the park website. “Visitor access will be limited to available parking in some areas.”

The park’s shuttle bus service, launched to reduce vehicle traffic in Zion Canyon, will not likely resume operations in the near-term.

At Glen Canyon National Recreation Areas, the park service and concessionaires scheduled a complicated phased reopening of facilities on Lake Powell, including boat ramps. On Friday, ramps at Wahweap and Bullfrog opened for day use though the weekend, along with some boat rentals and other services.

Until this week, boats coming off that lake were subject to a 30-day dry time before being launched on another Utah lake to prevent the spread of another biological threat: quagga mussels.

The Division of Wildlife Resources, however, has lifted that order and will resume inspections of exiting boats and hot-water decontamination of those found to carry the invasive mollusk. The agency has adjusted its procedures to ensure proper social distancing, but it could delay trips home.

“Boaters should be aware that these modified protocols will take longer than a normal inspection or decontamination because they have been developed to minimize interaction between individuals,” said Nathan Owens, DWR’s aquatic invasive species coordinator. “We ask for your patience during this time as protecting the health of our staff and the public and preventing the spread of quagga mussels are both very important.”

Some state parks have become uncomfortably crowded in the two weeks since Gov. Gary Herbert ordered them open to all Utahns.

Officials responded by imposing capacity caps that keep people from entering when parks are full. This has happened several times at popular reservoirs in Washington County, including Gunlock State Park, where an attraction has been “turned off” to keep people from congregating by the dam on the Santa Clara River.

Instead of spilling water over the top of Gunlock Reservoir’s dam, which creates waterfalls that visitors enjoy viewing, the water district is releasing water from the base.

There’s no turning off the hoodoos at Bryce or the slot canyons of Capitol Reef, though. Those two parks saw limited traffic after their midweek reopenings, but they are bracing for more people this weekend.

At Bryce, visitors can drive the entire park road to Rainbow Point and ride the 5-mile back path. They can use all the viewpoints, while officials figure out when to unlock the visitor center, the two campgrounds, most and restrooms. Of the park’s 27 miles of front country trails, only Navajo Loop and Mossy Cave are closed, while all 35.5 miles of backcountry trails are closed.

“We have these daily meetings at 9 a.m. where we’re basically coming up with plans, these risk assessment tools to work through basically any possible scenario,” Densmore said. “So if we were going to open the visitor center next week, how would we manage traffic into the door? Square footage in the building? How many people can we really have in there? What kind of signs do we need?”

Visitors are able to hike the entire 5.5 miles along the canyon rim from Fairyland Point to Bryce Point, and into Queens Garden at Sunrise Point. The Rim Trail offers plenty of space for visitors to give one another adequate social distancing. The one park restroom open is at Sunset Point on the Rim Trail’s halfway point.

“We have the flexibility not just to increase access, but to pull it back if we have to. It can go both ways,” Densmore said. “We want do as much as we can within the guidelines that we have. Every day we’re pulling all the information we have to try to make the best decisions we can.”

10 Things to Know About Colorado