I really didn’t know what I was getting myself into. Sure, I was expecting some narrows, but the name Burro Wash seemed fairly tame. It was early May in Capitol Reef National Park, and the park rangers had recommended this option for a slot canyon hike. As the forecast was sunny and clear for the next few days, there was no real risk of flash flooding, which could be fatal in canyon country. I had a small NPS map and basic accompanying instructions, but the route was straightforward to find. Soon enough, there would be only two options: pressing ahead or turning back.

I started out with my standard day-trip gear: full-sized backpack, sturdy boots, extra layers, first-aid kit, and hiking stick. Anticipating the possibility of having to pass through water, I also brought some old sandals that I didn’t mind ruining. I was solo-hiking, like many times before, and there were no other cars parked at the trailhead. This only added to the sense of adventure. The otherworldly beauty of southern Utah’s canyon country, with its warped layers of reddish-orange and off-white, increased more and more as I went further into the wilderness.

Things started out innocuously. After about a mile of hiking through sandy washes, some puddles of water appeared on the trail, but there was still ample room to navigate around them. A little later, following the NPS directions, I was able to avoid crossing one long pool by backtracking, then going up and over some slick rock on one side of the canyon. As I ventured further in, though, the beautiful striated walls become much steeper and higher, and the path narrowed considerably. 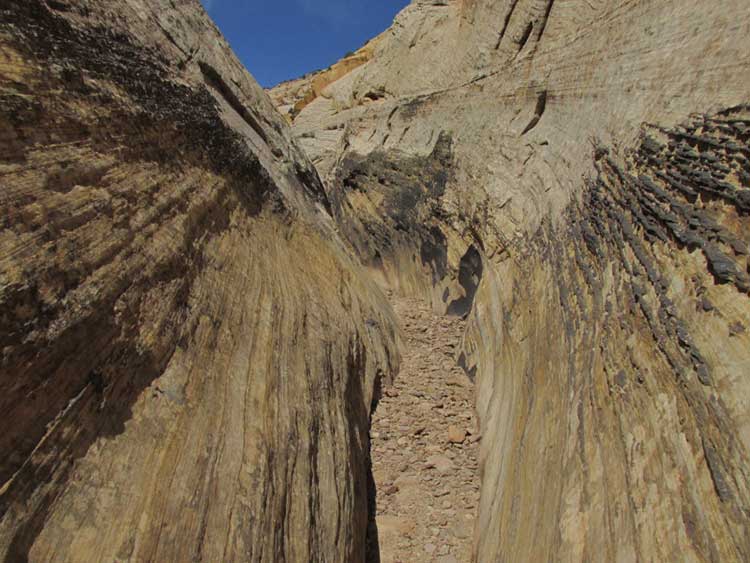 The canyon was jaw-dropping: ahead of me it stretched with smooth walls, sometimes flat, other times curvy, but always with sublime elegance. The walls now blocked the sun, and the temperature dropped notably in the shade. I often had to walk sideways, dragging my pack alongside me, as the path was no wider than the distance from my elbow to my wrist. 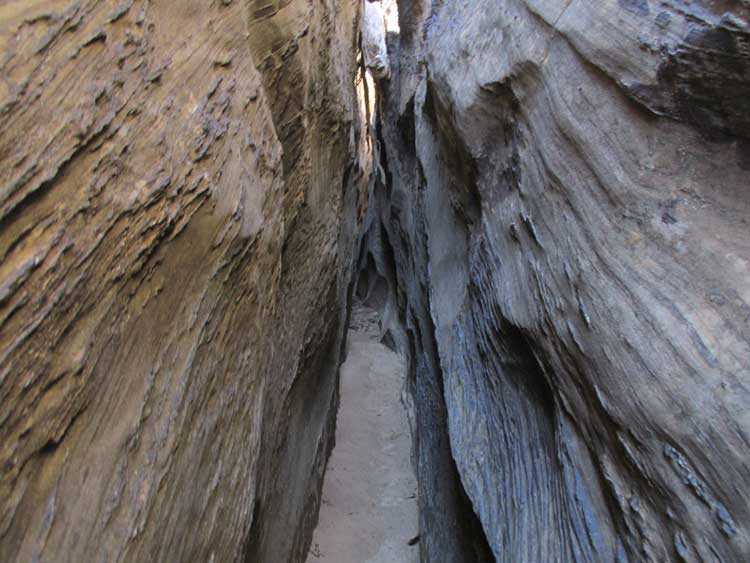 Every stretch was stunning in its own way. As I slowly continued forward, awestruck and navigating fallen rocks, I quickly realized that this hike’s distance (3.4 miles one-way) was all but meaningless once one was in the thick of it. While there was usually a sliver of sand to walk on in between the towering walls, many times there was no good footing at all. In one particularly memorable stretch, a pool of an unknown depth covered the path for maybe 20 feet, and two chockstones were wedged in between the canyon walls – a huge one high above and a large one closer to the far end of the water. I reluctantly switched over to sandals and tried to keep to the edges as much as possible. The water was extremely cold, but thankfully only about ankle-deep. 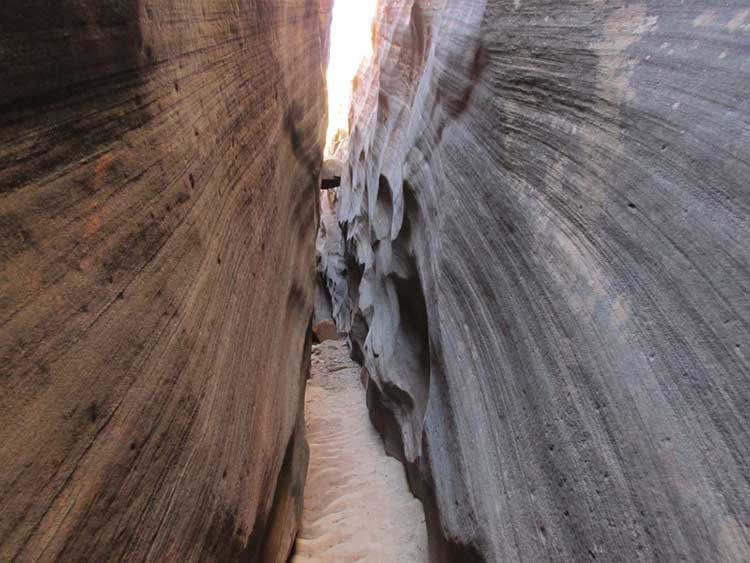 I often ran my hands along the smooth walls as I hiked further in, marveling at the power of nature – specifically water – in carving this canyon through the sandstone. By contrast, my own movements seemed loud and clumsy at times, like the crunch of my boots on sand and my pack inadvertently scraping along the walls. Repeatedly faced with boulders in the way, I had to hoist my pack up on top, then scramble up and drop it down the far side. I was having a blast navigating such a physically challenging route.

Two or three times after the start of the narrows, the canyon abruptly widened. Emerging from the tight, shady confines into bright sunlight was a bit disorienting. The surrounding off-white sandstone slopes reflected some of the glare, and the sky was a vivid light blue. These made for fine rest-and-snack stops. Around the next bend, though, it was right back to the narrows.

At one point I came upon a gorgeous stretch: a thin cleave between two smooth rock walls that sloped out higher up, with the sky visible above, and water covering the path as far ahead as I could see. The water reflected the sky and the rocks, but betrayed nothing of its depth. 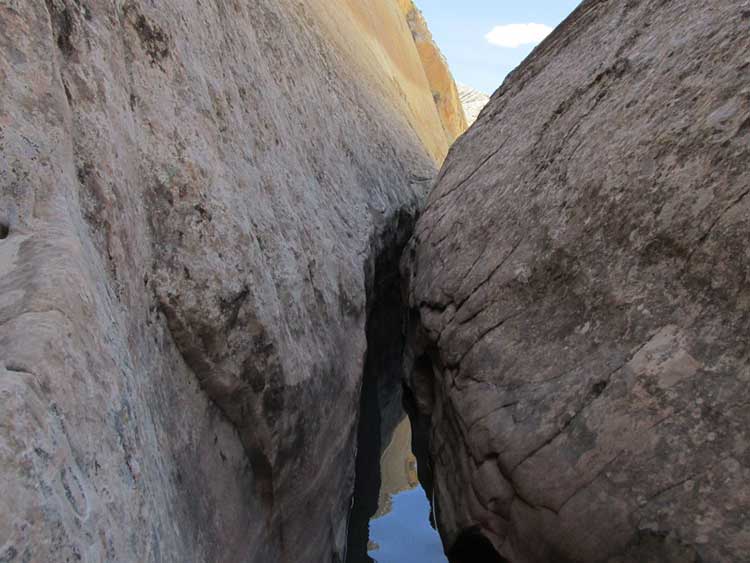 Using my hiking stick to probe for underwater rocks and debris, I proceeded cautiously but with enthusiasm, despite the cold water. It was slightly alarming, however, to feel this icy-cold water rise above my knees, and then to waist-height. I unbuckled my pack’s hip strap and hoisted it up high, carrying it entirely on my shoulders, and hoped that the water wouldn’t keep rising. At this point, though, I was all but committed to getting through. And having this unreal scenery to myself made the discomfort pale in comparison.

Thankfully, the water eventually receded and the narrow strip of sand re-emerged between the twisting rock walls. After another lengthy series of narrows, I came to what appeared to be the end of the trail for most people. It was an open space that began to narrow at the far end, where a pool of water lay in the shade at the base of an enormous chockstone. The canyon continued above, but the sheer walls prevented any alternative route up except over the slippery boulder, easily some 12 feet high.

I set my pack down on the sandy shore of the pool, waded across, and tried to scramble up. I failed. It was slick, and I couldn’t even get a first foothold up, particularly starting from within the water. I returned to my pack and had a snack as I took another look at the chockstone from afar. It looked like there were some reasonable handholds further up if I could just get started climbing it. I decided to give it one last try before calling it a day and turning back. I struggled a few more times, but I finally managed to pull myself up via some tenuous lower handholds, and then I was indeed able to get to the top.

Except for what I was wearing, I now had nothing at all with me – no camera, no first aid kit, no extra layers, no water. Undeterred, and proud of getting over that chockstone, I psyched myself up for this final stretch of narrows. First though, there was another pool, with towering walls on both sides. It did not seem very long, though, perhaps 10-15 feet, and beyond it the slot canyon was dry, at least from what I could see. Thinking that the worst was already over, I walked in, and was appalled at how deep the water was. It almost immediately went from knee-deep to waist-deep, then soon to chest-high and up to my neck. Shocked and freezing, I half-walked, half-paddled with my hands to get to the other side, where the slope rapidly rose. It had essentially been a giant pothole in the canyon.

Shivering, I continued on. The narrows were dark, and did not last very long compared to previous stretches. After a few minutes, I came to the real end of the trail: a beautiful enclosed chamber, about 15 feet in diameter. The tan-orange walls were sheer, with an impassable pour-off high up on the far wall. I soaked in the magical sight for as long as I could, feeling blessed to be in that rarely-visited cathedral. But I was cold, and knew that I needed to keep moving.

I retraced my steps, and took the plunge through the deep pool again. The second time was much worse. While the first time had been a shock, my body had been starting to warm up again. Passing through again negated all of that, and chilled me to the bone. I clambered down the big chockstone, landing with an unceremonious splash into the base pool. Then I quickly picked up my pack and moved to a sunny part of the open area. A late lunch in the sunshine was delightful, and necessary to warm me up. Otherwise, the return trip through the canyon – almost entirely in the shade – would have been very tough. After lingering for a while, I made my way back through the all of the narrows and the waist-deep pool, which didn’t seem nearly as bad in comparison. 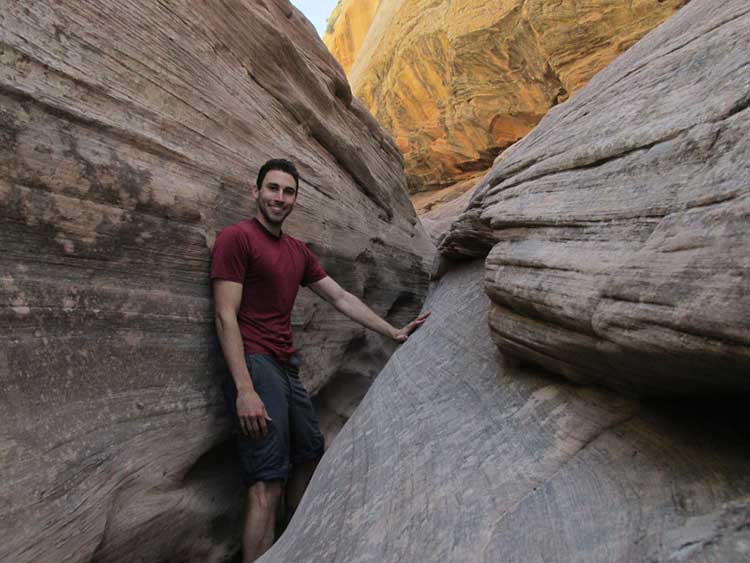 Near where the rocks first started to narrow, I finally encountered some other people: a family of five, including three young kids. If Burro Wash had pushed me to the limits of extreme adventuring, I didn’t know how far these guys would get. I told them what to expect, and wished them the best on their own adventure. Mine had been incredible.

As Utah’s national parks reopen, visitors should brace for a ‘new normal’
Tours and Lore of the American Southwest