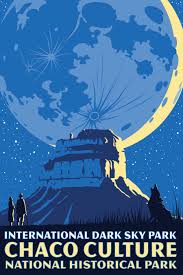 Last August, northwestern New Mexico’s Chaco Culture National Historic Park (NHP) became the fourth unit of the U.S. National Park System to received the designation of International Dark Sky Park Association. Added to the National Park System in 1907 by President Theodore Roosevelt and designated a UNESCO World Heritage Site in 1987, Chaco Culture NHP encompasses the high-desert landscape of Chaco Canyon and the grand ruins of the heart of the Ancestral Puebloan or Chacoan culture which spread throughout the Four Corners region 1,000 years ago. Chaco Canyon, with its ruins of massive, multi-story stone buildings called Great Houses and prehistoric roadways, was the ceremonial, administrative and economic center of the Chacoan culture between 850 and 1250AD.

Today, the park draws visitors not only interested in ancient cultures and spiritual significance, but also those seeking natural darkness and the beauty of the pristine, star-filled sky. According to monitoring conducted by the NPS Night Skies team, Chaco remains one of the darkest places in the National Park System and is considered one of the best places in America to stargaze. As such, the NPS is committed to reducing its own light pollution and educating visitors and nearby communities of the value in protecting this incredible resource while interpreting the story of the Chacoans who often oriented their Great Houses and roadways to solar, lunar and cardinal directions.

Despite the NPS’s commitment to protecting Chaco’s night skies, threats to this resource remain. Along with light pollution emanating from growing urban areas including Albuquerque and Farmington, New Mexico, the growing demand for oil and gas development in the northwestern corner of the state has the potential to impact the quality of the night skies at Chaco. Flaring of natural gas and an increase in intensive artificial lighting from construction activities, vehicle traffic, and support facilities can all affect the quality of the night skies both at the park’s higher elevations and inside the canyon. National Parks Conservation Association and our partners are currently working with the New Mexico Bureau of Land Management to plan for new oil and gas development in the Chaco area with the goal of protecting not only the incredible cultural resources but also the star-filled night skies that the people of Chaco gazed at and highly valued a thousand years ago.