The Plains Indians “Rites of Passage” involves a wilderness experience or “Vision Quest” in preparation for the world.  This is a story about 10 teenage delinquent girls that were required to participate in a similar ritual through a 10-day backpacking trip in the Chiricahaw Mountains of Southern Arizona, however, these girls were more streetwise than wilderness savvy. This particular outing had been planned for almost 3 months with ongoing rigorous physical training and learning other outdoor skills. The girls were to hike a determined amount of miles and participate in solo time in order to look inside themselves to find out why they felt the need to act the way they did. I was one of 5 adult staff that also chose to participate.

The Chiricahaw Mountains can be hot even in early May and our first goal was to reach a food cache 12 miles ahead.  As the sun climbed higher into the cloudless blue sky, hot bickering exploded among the girls and their pace slowed even more.  They weren’t used to wearing heavy packs and the thought of no food for 12 miles constantly weighed on their minds. Some of the girls were easy to get along with, some weren’t. I’ll admit I had my favorites, however Beth (names have been changed) wasn’t one of them. Only after a mile of hiking the dusty trail, Beth, twelve years old, cropped, brown hair, chubby and a slight cleft on the right side of her lip, whined, “My feet hurt.”
Beth was badly out of shape, as were several of the other girls.  She also appeared to be a little mentally challenged and constantly teased the other girls by hiding their clothes or acting silly. Little did Beth realize that on this trip she would learn to trust not only others but herself as well.

By early evening, we still hadn’t reached our destination.  Blue tarps were set up on a ridge overlooking a valley and the girls fell asleep, hungry, angry and disappointed.

The next morning, the birds tweeted merrily and the fragrance of fresh pine drifted through the air.  The day promised to be another warm one.  Everyone quickly packed their sleeping bags and tarps then walked single file down the narrow mountain trail.  Beth, the last person, again, started complaining about her feet.

Their second challenge was ahead. The trail dipped sharply down 200 feet. Begrudgingly, the girls loosened their packs and dug inside for helmets.  I was the rear leader this time. I had worked with this organization for about 6 months now and was becoming disenchanted with the responsibility of these very troubled girls. I understood the company’s philosophy in attempting to get the girls to stretch their horizons and get back on track, however, this descent could be a safety hazard.

I looked over the edge and said, ” OK girls, Listen up.  The only safe way down this trail is to back down slowly while hanging onto the bushy branches that are jutting out along the trail.  So, use the branches like a stairwell bannister.  Is that clear?”

“Is that clear?” I yelled louder.

“Yes!”  Most of the girls replied.

“OK, strap your helmets on and lets go.  One at a time.  There will be staff at the bottom and in the middle, so there is nothing to be afraid of.”

Helmets on, the girls backed down the steep mountainside single file.   Most of the girls enjoyed the challenge and didn’t need assistance.

Beth, on the other hand, being the last person, stalled at the top. She whimpered, “I can’t do this.”

“Yes, you can.” I firmly said standing behind her. “Just grab the branch closest to you and back slowly down while still holding on.  You saw the other girls do it and I know you can do it too.”

She walked slowly forward, turned around and grabbed the top branch and started to inch down, when suddenly her helmet slipped over her eyes!

She screamed,“I can’t see!  Ahhhhh!”  Wildly grabbing into the air, then tumbled head first down the steep, slippery slope.  Fortunately, into the arms of June, another staff.   “Whoa girl. I got you.” June said.

Whimpering and dusty, Beth clutched onto June like there was no tomorrow.  They held hands the rest of the way down the gravely trail.  I waited till they reached the bottom, heaved a deep sigh of relief and followed quickly thereafter.  There was still miles to go till the food drop.  A few hours later hiking through a ravine full of mesquite trees and no further mishaps, lay the first food cache.

“Yea!”  Everyone yelled. The food parcels were quickly opened for a feast of spaghetti, soup, bread and brownies.

The girls took a day and a half to walk twelve miles.  Their attitude wasn’t always pleasant because of their empty stomachs and hauling such heavy packs, but they were learning about self-reliance and team work.

If you are wondering where these mountains are, below is a map that I hope gives you an idea. 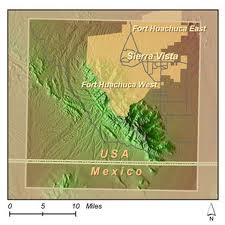 1 thought on “Chiricahaw Rites of Passage”