Why do the deceased hang around places they no longer can partake in? Of course, they are only in another dimension and are able to participate in both worlds. Sometimes we are able to catch an image in a photo or sometimes, it is a feeling or an object moved.

Since Santa Fe is the oldest capital in the United States, there are a lot of ghostly presences. This area has a dramatic history of the human condition. Lots of fights as well as lots of love.

Our tour guide, Allan Pacheco, has lived in Santa Fe all his life. He himself is quite the colorful character. The day of our tour, he wore a black leather jacket with a brown felt hat shaped like a smaller sombrero, his brown hair hitting at his coat collar. He obviously loves this topic and became quite animated when sharing the local history. He can tell quite a yarn and has pictures to prove of ghostlike visitors in this area.

Our private tour started at the front of the San Miguel Mission Church, the oldest church structure in the United States on a chilly November afternoon. Original adobe walls house an altar that was built by Tlaxcalan Indians from Mexico under the direction of Franciscan Padres, ca1620.

Other passersby tried to listen in and Allan became disgruntled, so he quickly moved the five of us into the church. Once inside, the building has a somber feel with ornate paintings and statues gracing the back of the church. Under the front where the sermons are given is an underground kiva that was once used by Indians for ceremonial purposes.

After the church, we wandered around downtown Santa Fe. For the next 2 hours, we listened intently and imagined another time period as Allan’s story telling drew us into some of the more famous hauntings.

It was only in the last place we visited at the historic and haunted La Posada Resort, that I captured on digital a glimmer of ghostly energy. If you look closely, circling the lower steps of the stairs is a burst of small bright lights and also up a little ways on the right side of the hand railing. It may be someone walking up the stairs to the suites above. 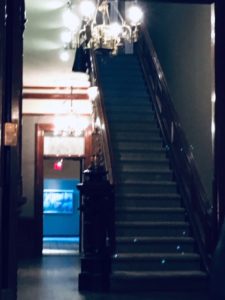 Stairs to suites in La Posada

My friend, Shirley, believes she might be related to famous Julia Staab who used to live in the suites at the La Posada Resort. Rumors say Julia was a very unhappy woman. Her husband locked her away in her suites to produce babies- which she lost many. He also abused her physically as well. However, according to Allan, there is much more to this story. Turns out Julia reveled in the attention and was quite the bitch!

Would I recommend this tour? I would. If you enjoy learning the history of an older Santa Fe, then Allan Pacheco is your inside man. To learn more about his tours, visit http://www.santafeghostandhistorytours.com.