As Summer moves into autumn this month, (September 23), a few types of butterflies migrate, but most are permanent residents. Interestingly enough, they don’t go anywhere. When you don’t see adult butterflies on the wing, it just means they’re going through another life stage: egg, larva (caterpillar) and pupa.  Butterfly eggs are pinhead-sized and hard to spot, but searching for the caterpillar and pupa stages can add interest to your time outdoors. 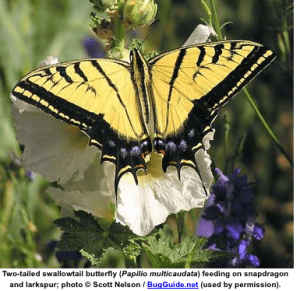 In the U.S. there are over 700 species of butterflies – about the same number as birds. Short of Texas, Arizona has more species of butterflies than any other state: 331. Southeastern Arizona, with around 250 documented species has been a natural draw for butterflies for years. The most active season for butterflies is during the monsoon, and in particular, the month of August. During this rainy season the desert turns green overnight and butterfly numbers explode. Vagrants, or influx species, come up from Mexico, and this corner of the state is a virtual “Mecca” for the butterfly enthusiast.

The Two-Tailed Swallowtail Butterfly (Papilio- Multicaudata) was designated the official state butterfly of Arizona in 2001. This large, (wingspan 3-5 inches), yellow and black striped butterfly is truly a gift from nature. It has two tails and beautiful blue markings scaling across the hind wings. This butterfly is lovely and graceful, yet it is so rarely enjoyed up close and personal.

The caterpillar (larvae) of the two-tailed swallowtail butterfly is light green and marked near the head with four yellow dots and two yellowish eyespots with blue centers. The “neck” of the caterpillar is banded with black and yellow, and the body has several rows of tiny blue dots. The caterpillar turns brownish or reddish just prior to pupation. Caterpillars feed on the leaves of a variety of trees and shrubs, adults drink flower nectar. 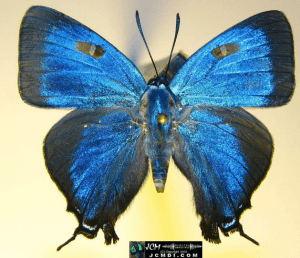 In Colorado, the Colorado Hairstreak Butterfly (Hypaurotis-Crysalus) was also designated the official state insect of Colorado in 1996 due to the steady lobbying of 4th graders from Wheeling Elementary in Aurora, Colorado (led by teacher Melinda Terry).

Native to the American southwest on both sides of the Continental Divide where elevations are between 6,500 and 7,500 feet, the Colorado Hairstreak is easy to identify by the slender “tail” protruding from the hind wings and by their beautiful, distinctive coloration.  This butterfly boasts a vibrant purple hue matching the Rocky Mountains. The colorful patterns on its wings are actually part of a butterfly’s defense system, diverting attacks from predators.Their primary diet consists of tree sap, raindrops, and aphid honeydew.

In addition, there are more than 250 types of butterflies found in Colorado.  The endangered Uncompahgre Fritillary Butterfly is found only in the San Juan Mountains in Colorado, living above 13,000 feet. They reside in patches of snow willow and have a limited habitat.  If you are ever in Denver and want to learn more about butterflies, check out The Butterfly Pavilion.  You won’t be disappointed. 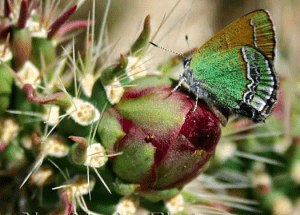 In 2003, New Mexico also designated the Sandia Hairstreak Butterfly (Callophrys-Mcfarlandi) as their official state butterfly. The Sandia Hairstreak was discovered in Albuquerque in 1959 at La Cueva Canyon and can easily be found in New Mexico’s wide open spaces, towns and cities among native beargrass. This butterfly is gold and green in color, while its caterpillar is pink, lavender and white.

Even though Utah hasn’t designated any one butterfly for their state,  over 80 species have been spotted traveling through the state. There are many gorgeous butterflies to admire such as the Red Spotted Purple (Limentis Arthemis-Astyanax) or the Aphrodite Fritillary Butterfly (Speyeria-Aphrodite).  For more information on Utah’s butterflies, check out The Butterfly Site.

Without a doubt, butterflies are flashy, showy insects that capture the interest of young and old alike.  Butterfly watching may be where birding was 40 years ago (birding is now a $14.4 billion dollar industry).  People’s interest in butterflies has grown remarkably and in tracing interest in butterfly counts (where, like birds, species and numbers are recorded), the numbers of participants has increased ten fold in the last 27 years.

However, climate change is also affecting their habitat and according to Robert Pyle, a Denver native butterfly specialist, ”The future of butterflies is in our hands, with how we choose to treat the Earth and its inhabitants.” 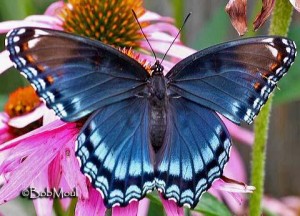 Where to Look For Butterflies:  Many butterflies are attracted to mud puddles to absorb salts and other chemicals.  For successful butterflying, you don’t have to tough it out in bad weather because butterflies won’t be flying.  The butterfly activity is on warm, sunny days without too much wind.  A few kinds will fly on cloudy days, even in the deep shade of the forest, but most like sunshine and they’ll stop when its overcast.

To find a good variety of species, it helps to visit a variety of habitats.  A few types of butterflies will range far and wide over the countryside, but many are limited to particular habitats. Therefore, if you have an interest in natural history, then becoming a butterfly watcher is a wonderful way to explore the outdoors.

“Just living is not enough”, said the butterfly.  “One must have sunshine, freedom, and a little flower.”  —-Hans Christian Anderson

Are You Going to The Four Corners Whole Expo- Sept. 12 and 13th?
Host your own Geocaching International Film Festival Event

2 Responses to Where Do The Butterflies Go After Summer Is Over?