Do you enjoy looking up at the night sky and figuring out where the Big Dipper, Little Dipper or Orion constellations are at certain times of the year?

Every month the City of Rocks State Park offers a public showing with interpreter for the passing tourist or local from Silver City. Viewing starts around sunset, so be sure to bring a light jacket, flashlight and chair.  The next gathering will be September 28th, 2013.  Faywood Hotsprings also offer this spectacular night time show while soaking in one of their many public or private outdoor mineral water soaking pools.

Faywood Hotsprings lies just south of the City of Rocks State Park, but unlike the City of Rocks, it is private property. In the 1850’s, the springs were know on Ojo Toro, or Bull Spring, because wild bulls would graze at this site.  Stagecoach lines would stop at the spring during the 1800’s.

Since, stagecoaches are no longer the mode of transportation, trails for horseback riding and hiking are plentiful at both Faywood and the City of Rocks State Park. Other similarities amenities include tent and RV hookups, picnic areas, modern showers as well as being open year round. Winters are mild, with rocks and evergreen trees to provide shade to cool visitors in the hot summer.  More than 60,000 people visit the City of Rocks park each year during all 4 seasons. 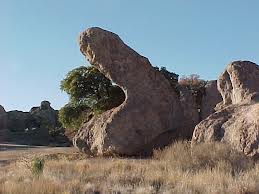 One of the many unusual formations at the state park

The City of Rocks State Park was established in May, 1952, and encompasses a one-square mile area in the scenic Chihuahuan desert region of southwest New Mexico at the elevation of 5,200 feet. Dominant plants on the surrounding plain are tree yucca, broomweed, and black grama grass.  This is truly a geological monument formed by large sculptured rock columns, or pinnacles, rising as high as 40 feet and separated by paths or lanes resembling city streets.  The rocks forming the City of Rocks, such as the Kneeling Nun Tuff, were produced by a very large volcanic eruption that occurred 34.9 million years ago.  Then erosion over millions of years slowly formed the sculptured columns seen today.

While living in Silver City, my partner and I frequented Faywood Hotsprings and camped at City of Rocks several times.  It was always a pleasant adventure and the perfect weekend getaway.  For more information visit,
www.emnrd.state.nm.us/SPD/cityofrocksstatepark.html
www.campsitephotos.com/campground/City-of-Rocks-State-Park
www.faywood.com or 505-536-9663

The City of Rocks, in the extreme southeastern corner of Grant County, 32 miles south of US180, and 4 miles east on NM61.

Faywood Hot Springs is on Highway 61, halfway between Silver City and Deming, next to the City of Rocks State Park, 2 miles from the intersection of Hwys. 180 and 61.

Signup for news and special offers!