San Luis Valley in Colorado is the Location of this Fort 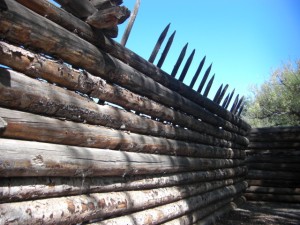 In a still very isolated area of southern Colorado known as the San Luis Valley, is a reconstructed barricade.  Built in 1962, with 12 feet high logs dovetailed together.  Inside this fort are approximately 50 round pencil sharp 20 foot high poles.  In 1807, Zebulon Pike and his men built this fort because they were planning to stay the winter.  Pike had been commissioned by the American Government to explore the area now known as Colorado to search for the headwaters of the Red and Arkansas Rivers.

It Was Actually Spanish Territory at the time

However, the isolation may have been Pike’s downfall because it was here that Pike and his men were taken prisoners by 100 Spanish soldiers and escorted to Santa Fe.  When arrested, he didn’t realize (or at least said so), that he was in Spanish territory. They were questioned and later released in American territory at the Louisiana border.  Pike’s notes were taken away in order to hinder him from sharing what information he had learned about the Spanish territory and passing it on to others.

Where the Wild West Began

“I think Pike’s Stockade is the most significant site (in the nation) because it is where the struggle for the West began,” Said Joseph Bell, of the Colorado Historical Society.

The fort is now a peaceful reminder of bygone days and pleasant area to have a picnic.  The Conejos river is just a quick walk through a forest of cottonwood trees. These magnificent trees offer shade over the four green steel picnic tables and the grounds are surprisingly clean, no graffiti or trash is in sight.

From the Alamosa Welcome Center on 6th and State street, drive south on State to 12th Street. Turn Left on 12th and go approximately 9 miles to the intersection that turns into Road 24.  On the left side right before the road turns into gravel is a plaque that gives information about Pike and his men.  From there travel south down Road 24, four more miles till the road dead ends at a steel archway,  “Pikes Stockade 1807- National Historic Landmark.” Follow the gravel road into the park.

For more information, visit the Fort Garland Museum, or the Sanford Museum.  Sanford has an excellent exhibit of Pike’s Journey.

Catwalk on the Wild Side